My main rig is now an Icom IC7800, an excellent radio for RTTY. The IC756Pro is now used as a spare, and the IC756 has now found a new owner in the form of Ian GM4KLN.

I have had to move things around to accommodate the new IC7800!

Above the radio is the monitor connected directly to the 7800, and the Icom SP23 speaker.

To the right of that, you can just about see the MFJ ATU.

The two main monitors are both 19″ widescreen monitors, connected to my dual-core 2.6GHz Win7 (32bit) PC.

Below those are my Microham MKII, an IC7000, plus a Yaesu GR600C rotator controller.

The inverted L is only about 5m above ground, but has allowed me to work VK, plus W/VE.

I also have a half-size G5RV, but use that mainly for listening.

I use the DXLAB software by AA6YQ for packet cluster, rig control, and log keeping: this is an amazing suite of software, and well worth looking at. Check out the DX Labs website.

This is a far cry from the old 386 that I used to run in the shack!

I also use the Microham MKII, which I invested in when I made the move to Win7.

Now, I would not be without it, as it is so much easier than having real COM ports.

For general RTTY work, I use MMTTY v1.66G, by Mako JE3HHT. This really is the best RTTY program around. You can find a link to this software on my links page.

For contesting, I use N1MM Logger+ with MMTTY, and now won’t go back to using hardware TU’s.

This is me in my shack as it used to be!

On the wall behind, you will see some of the many certificates I have won in RTTY contests.

I am also QRV on most of the datamodes, but RTTY is my favourite mode, although I now use FT8 / FT4 a lot.

I do occasionally use some of the other digital modes, but RTTY is my favourite mode, although I now use WSJTx for FT8 / FT4 a lot more now.

Here is a summary of my shack equipment:

Modems: Soundcard only now via the Microham MKII!

Software: MMTTY, N1MM Logger+, and a wide variety of software for the other digital modes.

The trap is made from RG58 coax, and comprises 11 turns on around some 40mm plastic waste pipe.

The trap dips at about 6.9MHz, so check this with a dip-meter. See the diagram below:

I used some 1.5mm enamelled copper wire for the antenna itself, which I obtained from a motor-rewinder.
The layout is best seen in this diagram below:

For the ground rod, I used about 6 foot of 20mm copper water pipe, hammered into the ground.

To connect the braid to the ground rod, I soldered a tag on to the braid, and then screwed this to the pipe.

Connect both lengths of wire to the trap, making sure you get a good mechanical join, as well as a good electrical join.

When setting up the antenna, first tune the 40m section, trimming back at the ground rod end, until the best SWR possible is obtained.

Next is the 80m section, and you obviously trim back at the far end this time.

I was able to get a good SWR around the RTTY segment, and it isn’t too bad down at the CW end either.

There are numerous websites explaining the theory behind Inverted L’s and also on coax traps, so this is just to give you an idea on how to start. I did get very concerned about the theory to start with, but just give it a go, and you will see just
how easy it really is.

The vertical part of my L only goes up about 5m, and the rest then drops down to about 4m at the far end.

My main reason for trying this antenna was originally just to be able to work some extra EU mults in the contests,
but it has proven to be a very useful antenna, and even tunes nicely on other bands with the aid of an ATU.

Below are pictures of my QSL cards.

The one to the left is from Gennady (UX5UO), via mail-order.
If you want to know more about his card designs, CLICK HERE to send him an email.

Or click HERE to visit his web page and see some samples! 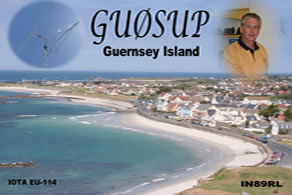 I also use cards printed by Tony LZ1JZ, such as the one to the right – check out his website HERE.

And below is a picture of my DXCC certificate #984 – all RTTY!

I also have WAZ, WAS and WAC – all using RTTY

I now have over 300 countries credited for DXCC on digital modes, and 5BDXCC.

Any comments or suggestion, please send to